At the age of 21 Kurt was already a black belt in taekwondo and an amateur kickboxing champion. He decided to become an actor and moved to Hollywood where, less than 3 months after his arrival, made his film debut in NRNS as the lead.

Our punk went on to appear in ALF (1986) and to star on the soap General Hospital as Ned. This was after he was turned down for American Ninja because he was too young. He was offered to appear in American Ninja III-VI but he didn't like the idea of working on all the films in South Africa (he also turned down No Retreat No Surrender 2: Raging Thunder in 1987 possibly due to the film's location). He currently appears on Guiding Light as Matt Reardon, but never did he kick ass again like in the red track-suit.

Kurt as of today is married to Maronda. They have two children: a son named Cole Madsen and a daughter named (Rafor Jefferson?) Madison Taylor. 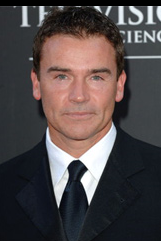