To this day there are three different versions of the No Retreat No Surrender soundtrack plus a very nice cover version of Hold On To The Vision. All of them are presented below.

Basically responsable for the music is composer Frank Harris. An interview in which he talks about the NRNS soundtrack and recent developments can be found here. 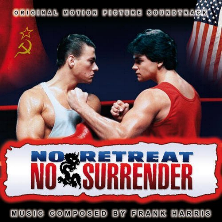 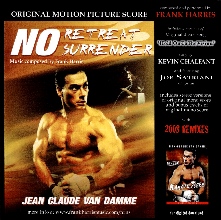 The world-premiere release of Frank Harris' score to the original, international version to NRNS. The album features, besides all the tracks heard in the film, four versions of Hold On To The Vision with vocals Kevin Chalfant featuring Joe Satriani on guitar.

The very rare player has been for a very long time the only existing soundtrack for NRNS. It was published in a very limited edition and can therefore hardly be found on the market.

A big deception for a lot of collector was and still is that it only contains instrumental versions (music composed and conducted by Paul Gilreath) and lacks first and foremost Kevin Chalfant's Hold On To The Vision.

20  "No Retreat, No Surrender Love Song"

This record was a pre-release to the then upcoming OST (1).

Some notes by composer Frank Harris:

"Finally after 22 years of waiting, fans of the movie “No Retreat No Surrender” and “Karate Tiger” can enjoy the original musical score by me via digital download that will include four versions of the main theme song “Hold on to the Vision”. For the movie score collector, I have included the complete music underscore in the three bonus tracks! There is about 30 minutes of original music content on those tracks. Unfortunately for reasons that are not entirely clear to me to this day, the version of “No Retreat No Surrender” that was released in the USA did not include my original score. This music however, does exist in the versions found in Europe, Australia, New Zealand, Asia etc.. Fans have been asking for this music for many years and the difficulty of getting permission from the original film company “Seasonal Films” out of Hong Kong, has been challenging. Fortunately, we now have a co-venture to make this possible." read more
a
Playlist

4  Hold On to the Vision Karaoke

"No Surrender", a German music project (www.vvolverine.de), made an outstanding cover of Hold On The Vision in order the meet the high demand of a quality version of the song. Unfortunately, this took place right before Frank Harris decided to release a remastered version of the song himself.
Still, it's very nicely done and I recommend this record that can be purchased here at CDDeal.

1  Hold On To The Vision (Single Edit)

2  Hold On To The Vision (Long Version)

3  Hold On To The Vision (Single Edit Instrumental)

4  Hold On To The Vision (Long Version Instrumental) 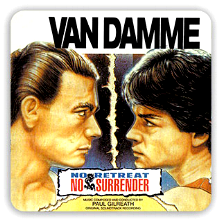